The price of Algorand (ALGO) has recently begun to rise. At the time of publication, the near-term resistance levels were $0.35-$0.36. A breakout above it would validate the bullish reversal.

A close examination of Algorand’s price movement on the two-hour chart revealed a bullish outlook.

Algorand (ALGO) is officially on the Cardano network, according to an announcement made by Cardano founder Charles Hoskinson in response to the Mikomedia A1 Rollup going live on Algorand.

Algorand is a non-EVM chain with numerous more distinctive features, making it the ideal choice for one of the first rollups outside the Ethereum (ETH) ecosystem, according to the statement. The Layer-2 A1 rollup’s launch is significant for Cardano and Algorand since it will enable network connectivity between the two projects. Due to the distinct topologies of the two blockchain networks, this would not have been possible without the rollup.

Algorand, the official blockchain platform partner of the FIFA World Cup 2022, noticed an increase in investor optimism. ALGO has seen quite a lot of significant gains over the past month. It is expected that despite the fact that the market is critical now, ALGO will soon see the bulls on its side.

According to AlgoExplorer, there were 17.3 million accounts on Algorand as of the end of the previous year. The total number of accounts on the network climbed to 23.5 million by 10 March 2022. These figures have only risen over the last few months, and Algorand seems to be becoming more well-liked. Now, many people are wondering whether it is worthwhile to invest in ALGO.

In 2021, the entire crypto-market exploded, and ALGO suffered a similar fate. However, after a little while, it immediately went back to $1. ALGO saw some early signs of a robust comeback in February, reaching $ 1.67 before dropping once more. From February to April 2021, ALGO’s price fluctuated and occasionally fell, but it consistently stayed above $1 to provide a support level.

FIFA announced its cooperation with Algorand towards the beginning of May, designating the network as FIFA’s official blockchain platform and announcing the availability of an official blockchain-powered wallet solution. The Q2 bull run, however, was short-lived. And, by mid-May, the market had crashed and ALGO was trading at $ 0.36.

In 2021, ALGO hit a low of $1.269 in the middle of December before soaring to $1.645 towards the beginning of the year. The altcoin maintained its upward trajectory, hitting $1.851 on 5 January 2022, before falling as the market entered a bear market, sometimes known as the “crypto winter.” ALGO was in decline until the middle of May. Since then, it has remained rather stable, circling the $0.30-level.

According to Coinpedia, ALGO may drop to $0.2807. Algorand could still expand with new alliances, integrations, or improvements. The website’s analysis further added that ALGO might rise as high as $0.4151 in this instance.

Given everything, buying ALGO must be a wise decision in the long run, right? Most analysts have positive predictions for ALGO. Additionally, the bulk of long-term ALGO price projections are upbeat. However, some are still not convinced about ALGO.

Why do these projections matter?

Algorand’s mechanism is what makes it so powerful. And, because it uses an open-source blockchain network, the history of its ALGO tokens is visible to everyone. Glitter Finance will soon integrate the Algorand DeFi ecosystem with Solana to improve interoperability in the blockchain. This will guarantee that traders who use Glitter can transfer their digital tokens from Algorand to the Layer 1 blockchain.

To increase the effectiveness of blockchain transactions, Algorand was created. While adding a new block to the Bitcoin blockchain takes about 10 minutes, Algorand can process a stunning 1,000,000 transactions each day, or roughly 1,000 per second. Therefore, compared to other networks, it can offer significantly lower transaction fees.

The acceptance of the ALGO has increased significantly this year. The alliance between FIFA and Algorand is one of the best. FIFA will use the Algorand Network as its official blockchain.

That’s not all as Algorand and EI Salvador have teamed up to create blockchain infrastructure.

Algorand and ICON have participated in a significant collaboration. Algorand will have a security partner with BTP, thanks to this integration. The Algorand network will become more vibrant and diverse as a result of this.

However, with the decline in market capitalization, ALGO’s Year-to-Date (YTD) volume decreased by -88%. It’s interesting to note that after losing 37% of its value in July, it was unable to increase average volume. In fact, the altcoin is still 89.91% behind its all-time high (ATH). The only thing positive about ALGO’s terrible July performance was a momentary 14% hike in transaction volume.

In this article, we’ll quickly review the current activity of the cryptocurrency with a focus on market cap and volume. In conclusion, predictions from the most well-known analysts and platforms will be summarized together with an analysis of the Fear & Greed Index to determine market mood.

ALGO’s price, volume, and everything in between

At the time of writing, ALGO was priced at $0.30 on the charts. As expected, it was almost 90% away from its former ATH on the price charts.

With the bulls returning, ALGO has managed to get the attention of investors. Despite some optimistic predictions, however, it should be pointed out that the ecosystem is still developing. As more applications are developed on the Algorand platform, the value might only increase. Maybe double, or triple.

Algorand also has benefits in terms of processing transactions. Users will profit from its scalable operation and extremely efficient operation. The network is processing at 1,162 TPS and has a block finality of 4.36 seconds.

After CEO Steven Kokinos announced his resignation, the ecosystem is currently facing some difficulties. He will leave Algorand, but continue working on other ecosystem initiatives in its place. Now, which tasks he will continue to work on are completely unknown at this point.

Today I want to share with the #algofam that I’m transitioning out of my current role as @Algorand’s CEO to focus on key projects in the @Algorand ecosystem that will help scale adoption. (a 🧵).

Although it is difficult to provide 100% accurate technical analysis for ALGO, you can view the aggregated ALGO buy-and-sell rating in real-time for the chosen time frame using TradingView’s advanced technical analysis tool. Moving averages, oscillators, and pivot points are the three most prominent technical indicators used to present a summary for ALGO/USD.

Interestingly, at press time, the same was flashing a SELL signal.

Let’s now look at what well-known platforms and analysts have to say about where they believe ALGO will be in 2025 and 2030.

On the contrary, Telegaon predicts that ALGO will hit an ATH of its own on the back of other cryptos touching their ATHs on the charts. According to its price estimates, ALGO will go as high as $10.34 by 2025, with its lowest price that year being $7.98. These predictions have been made based on the presumption that 2025 will be a bull market.

Even if there are 10 billion ALGO coins in circulation altogether, these assumptions appear excessive. To make Algorand more scalable, the issuance of these tokens has been spread out across ten years, with an end date of 2030.

The regulated nature of ALGO’s issuance is meant to protect it against excessive swings, dramatic (and unsustainable) bull runs, and collapses. This, even if it is anticipated that the aggregate supply of numerous cryptocurrencies would see high levels of volatility.

Now, because it does offer a useful service, it has already established a reputation in its market and has not reported any security breaches or other forms of compromises (economic, reputational, etc). Unlike many other projects of a similar nature, the token itself has utility and makes sense.

Moreover, even if the altcoin is practically trading at the same levels as it is now, its trading volume has been usually been significantly high. This tells us there is a lot of interest in buying at these prices right now. In the extreme anxiety stage of the bear market, it can also be assumed that many of the whales are currently accumulating.

2030 is too far off. That may be the reason why most are laying off from making predictions about ALGO just yet. Even so, it’s worth looking at where the cryptocurrency and the network is at the moment. A look at the series of investments and projects Algorand has been able to take under its wing should be evidence of that.

With more of these updates lined up going forward, one can only imagine what its impact will be on the wider ecosystem and ALGO’s value.

One of the cryptocurrencies in which you might start investing is ALGO in 2022. Despite some optimistic expert predictions, the ecosystem is still developing. The value might easily double or triple this year as more applications are developed on the Algorand platform.

Algorand also has benefits in terms of processing transactions. Users will profit from its scalable operation and extremely efficient operation. The network is processing at 1,162 TPS and has a block finality of 4.36 seconds, according to the most recent information on the Nasdaq page. Stellar and this talent are practically the same.

If the market is in a BULL run, Algorand is a great short-term investment. These newer initiatives typically outperform other, more well-known projects by a wide margin when the crypto-market as a whole is performing well.

The analysis mentioned above makes it clear that Algorand’s projections are somewhat incoherent. Whether future ALGO price movements will be good or negative, there is no general agreement. Indeed, a variety of elements, including announcements, new technological advancements made by Algorand projects, the larger crypto-ecosystem, legal status, and others, will influence potential growth in the future. For what it’s worth, the Fear & Greed Index was fairly balanced, at press time. 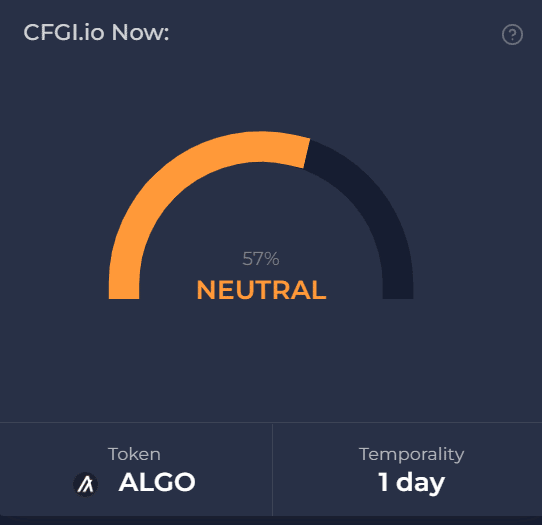 Apart from this, if we want to talk about innovation, John Woods, CTO of the Algorand Foundation, provided an update on the project’s efforts to lead the development of quantum countermeasures for more secure cryptographic technology.

Woods focused in particular on the Falcon algorithm, which provides a means of avoiding the possible risk posed by quantum computers.

The top specialists in the field were invited by the American National Institute of Standards and Technology (NIST) in August 2016 to create cryptography algorithms resistant to quantum attacks. Falcon, created by Algorand developers Craig Gentry, Chris Peikert, and Vinod Vaikuntanathan, was one of the chosen algorithms. Trapdoors for Hard Lattices and New Cryptographic Constructions is the methodology on which it is built.