The Cosmos network experienced an increase in development activity earlier this month, which has been a trend for Cosmos over the last nine months. Despite the bear market, developers were thriving, and projects like Osmosis could be crucial to the chain in the long run.

Despite the positive development activity, the price action was not particularly encouraging. It had a bearish outlook, but despite the downtrend, indicators showed consistent buying pressure. This implied that if market sentiment turns bullish, ATOM’s recovery could be strong. 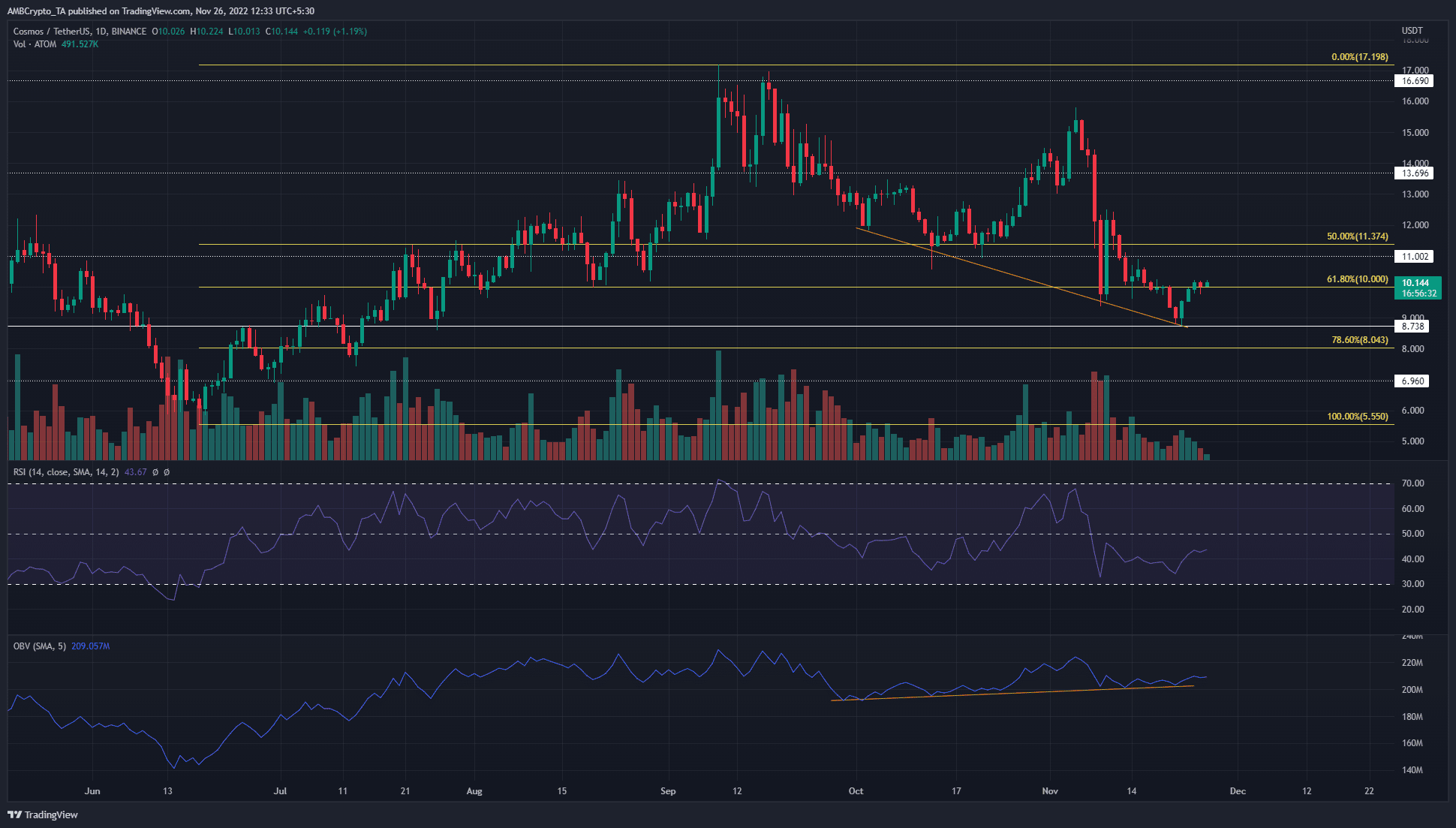 Earlier this month, the $10 level acted as support, but the bearish momentum saw this level broken. ATOM was able to register a bounce from $8.73, another horizontal level of significance. Yet, the market structure remained bearish. The Relative Strength Index (RSI) was also beneath neutral 50 to highlight bearish momentum was present.

If ATOM has been in a pullback since September, then the 61.8% and 78.6% are logical places where longer-term buyers would enter the market. A continuation of the previous uptrend can occur if Cosmos buyers can defend the $8 region. To support this idea, the On-Balance Volume (OBV) formed a series of higher lows since October. In the same period the price made a series of lower lows. This was a bullish divergence.

However, a divergence need not imply an immediate reversal. A test of the $8 level, if it materialized, could take weeks, but would offer a good buying opportunity, with a low risk and high reward for buyers.

Santiment data showed social volume to be on decline throughout November, as the metric formed a series of lower highs. Meanwhile, the weighted sentiment was in negative territory throughout the time ATOM descended from $14 to $8.73.

Development activity soared earlier this month but at press time was in a downtrend. If we looked further back in time, the development activity has steadily risen since February 2022. This would give long-term investors some hope.

For lower timeframe traders, the funding rate went into negative territory on multiple exchanges in the past couple of days. Shorter-term price charts showed $10-$10.25 to be an important zone of resistance as well.

For higher timeframe investors, a revisit to the $8-$8.5 region could present a long-term buying opportunity. A session close beneath $8-$7.8 could indicate further losses to follow.