Lido has been a prominent “stake-holder” for stakers on the Ethereum Proof-of-Stake network. According to several sources, Lido has the highest concentration of Ethereum staking pools. With Metamask’s recent announcement, Lido may be gaining traction. Can we expect an LDO uptrend as a result?

On 13 January, Metamask made a major announcement that might significantly affect how users gain access to Ethereum staking pools. ConsenSys has announced a new interface with the Ethereum liquid staking providers Lido and Rocket Pool, allowing MetaMask users to take advantage of these services.

With the release of Metamask Staking, users can stake Ethereum (ETH) via Lido, monitor their stETH token balances, and convert their stETH back into ETH via MetaMask Swaps.

Data from Dune Analytics showed that Lido was in the lead regarding the ownership of staking pools on Ethereum. Lido held a 29.06% market share for staking as of this writing.

Lido’s market share may be about to increase significantly due to the most recent move from Metamask. Additionally, there have been more validators overall on the Ethereum network.

Since the switch to the PoS network, the number has reached an all-time high of over 500,000, according to statistics from Beacon scan. How did LDO react to this development?

The asset ended the day in the green area, according to the Lido (LDO) daily timeframe chart that was examined. Additionally, it had risen by around 5% as of the time of writing, bringing the gains over the previous 48 hours to almost 8%. In addition to trading above the short and long Moving Averages (yellow and blue line), LDO was trading at roughly $2.

All signs suggested that LDO is now in a bullish trend. A strong bullish trend was evident as the Relative Strength Index (RSI) line was seen above 80. The RSI also indicated that there was a chance a price correction would occur soon. The Directional Movement Index, whose plus DI and signal lines were over 20, supported the interpretation of the RSI.

Volume and weekly users on the rise

The volume metric for LDO also indicated that LDO had gained momentum recently. The volume was above 230 million at the time of writing and was still growing. In comparison to the last three months of the previous year, the volume count at this time was higher. A trend toward higher volume was also visible.

The percentage of weekly active users was another area where LDO was building up impressive numbers. There has been a notable uptick in the metric’s reported weekly users. The average weekly increase in new users was also another noticeable development. 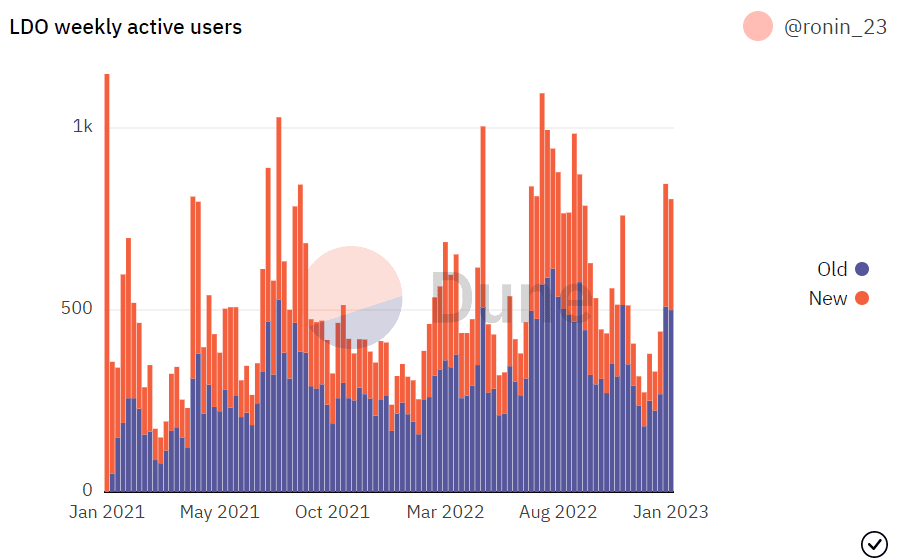 Lido and LDO investors may witness a real boost in users and value due to Metamask’s latest move. The popularity of the LDO token grows as more people can easily access staking, which raises its value.