Bitcoin [BTC] investors may have found a reason to stick with the king coin’s cause this week, especially after signs of a “Uptober” performance.

According to Santiment, Bitcoin investors appear to have settled on the long-term HODL strategy.

This was due to an 8.3% decrease in investor activity per BTC exchange holdings, which was a four-year low. This stance indicated that investors were inclined to sell.

👍 With #Bitcoin back above $20.7k, traders appear to be content with long-term holding as coins continue moving away from exchanges. With the ratio of $BTC on exchanges down to 8.3%, it’s the lowest seen in 4 years. October has been a big outflow month. https://t.co/MW8w07aJ5v pic.twitter.com/2J4ym7850K

At press time, BTC was leaning towards hitting $21,000. With its price at $20,959, it would have been expected that traders took advantage of the uptick and grab some profit. However, that wasn’t the case. So, could it be that investors were ready for a rally or was the bottom in?

In the same manner, Tomáš Hančar, a CryptoQuant analyst, took note of the incident. According to him, the lack of exchange deposits indicated that retail investors were less interested in accumulating BTC.

At the same time, BTC was currently experiencing low volatility. Hence, it was less certain that the price will spike to incredibly high levels. In addition, the low volatility meant that BTC might continue its consolidation. Hančar said,

“If last cycle is to be of any guide, then currently dying off volatility as well as sinking retail interest (judging primarily by the 4 year lows in exchange depositing transactions), then we could have up to, say a month, of this consolidating “quiet before the storm” still ahead of us before the final capitulation comes.”

Considering the happenings, Hančar pointed out the possibility that the bottom could be in. However, Bitcoin’s Market Value to Realized Value (MVRV) z-score revealed that the coin was still massively undervalued. With its value at 20,200, BTC was much below a “fair value”.

Despite the low exchange data, Bitcoin’s circulation has been relatively impressive lately. Santiment data showed that the seven-day circulation was 2.1 million at press time. Prior to the time of this writing, circulation was as low as 114,000.

Due to this rise, it implied that investors have utilized BTC greatly in the last few days. Similarly, the active addresses did not take a downturn. Neither did the number increase significantly. However, it maintained the 4.55 million position. The implication of this was that traders and investors were participating in a moderate number of transactions. In the event that it goes higher, Bitcoin most likely follows the increase.

Is the wait worth it?

Although Bitcoin investors might have remained loyal, it didn’t seem like there was much to pink from the “recurrence”. According to Glassnode, the realized profit between 26 October and the time of this writing was a glaring blemish.

The on-chain information portal showed that the realized profit was down to $98.08 million after being as high as $428.77 million on the aforementioned date. Hence, investors might need to continue activating the buy buttons to foster increased demand to make the most of this opportunity. 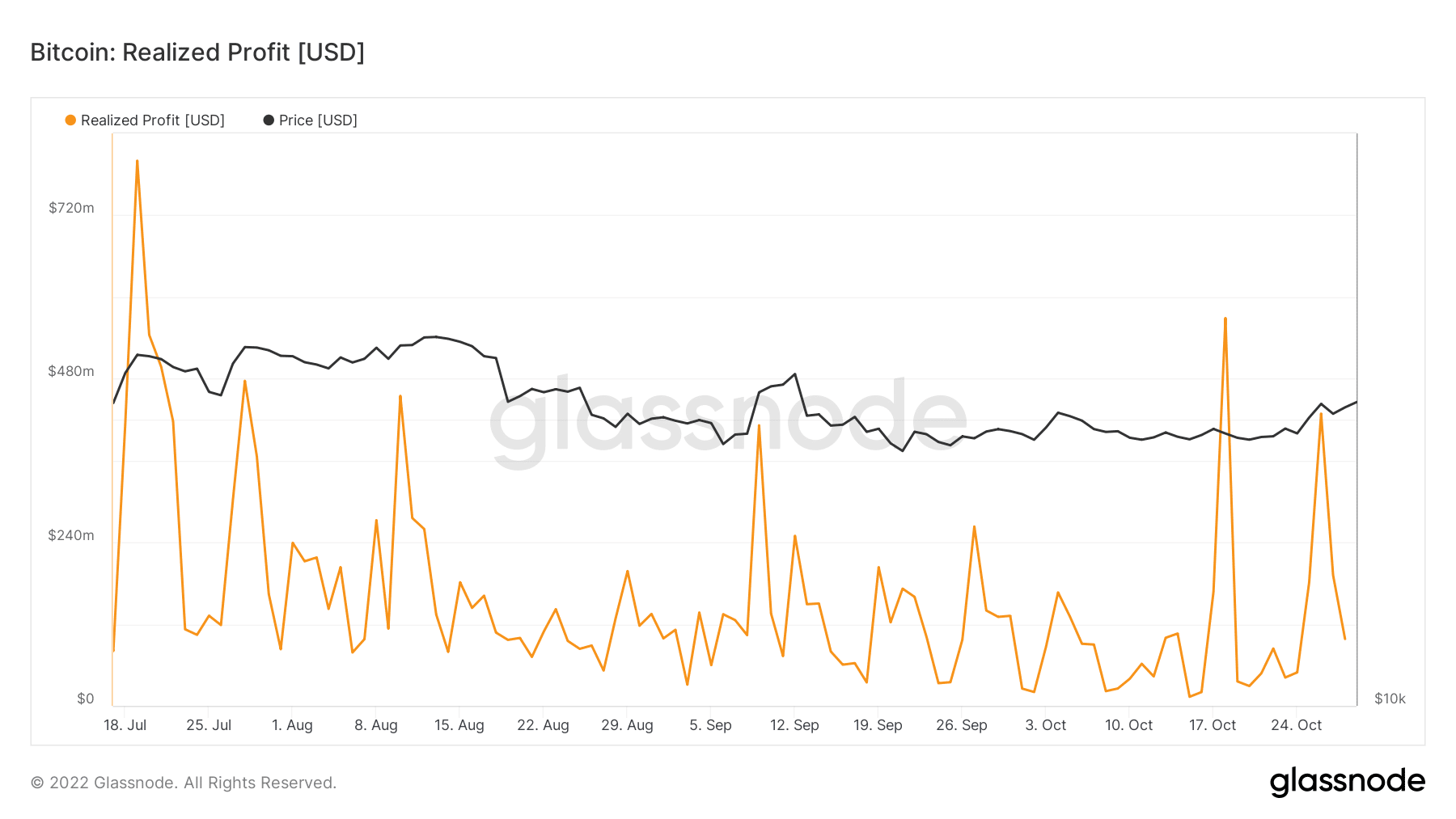