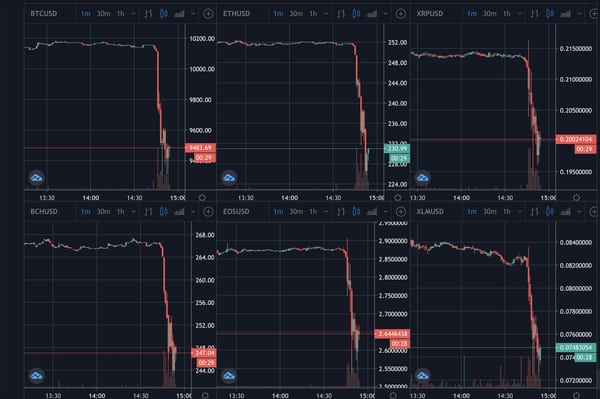 In concert with all other cryptos the plunge was in just five minutes, with only two of those minutes seeing a significant price movement as pictured above.

It’s unclear currently whether there’s any specific reason for this fall or just markets being markets with their random walks.

The number $10,000 however is a pretty big resistance line with bitcoin trying to take it and maintain it for much of this year.

So a bear push back perhaps should have been expected with shorts jumping quite a bit recently.

Shorts have increased by some 2,000 bitcoins, worth around $20 million, with it unclear whether someone knows something or they just betting because resistance line.

There was quite a ‘battle’ yesterday between bulls and bears at $9,500 with bulls winning, but bears are now trying to give them a scare so we’ll see who actually wins.

Another potential factor is the miners going bankrupt. After the halvening the hashrate plunged, with miners selling more than they mine.

Suggesting at least some of them are eating into their savings until they run out and presumably close shop.

Hence why generally it is thought the halvening does not reflect until weeks or months as first the network has to ‘clean up’ the ‘weaker’ miners who didn’t prepare.

Once that process is over then the fall of new supply might start being reflected, with this drop potentially being from these miners but there may have been some development which we are not yet aware of.

In that case we’ll learn soon enough who may have engaged in insider trading, but as stated it may well be just markets being markets.