Bitcoin [BTC] touched its lowest position per Spent Output Profit Ratio (SOPR) on November 19 for the first time since March 2020. According to Maartunn, a CryptoQuant analyst, it was vital to mention this when discussing Bitcoin’s on-chain status.

He also reported that BTC’s SOPR was 0.984 at the time of publication. When the metric hit rock bottom, it implied that the majority of HODLers sold BTC at a loss. 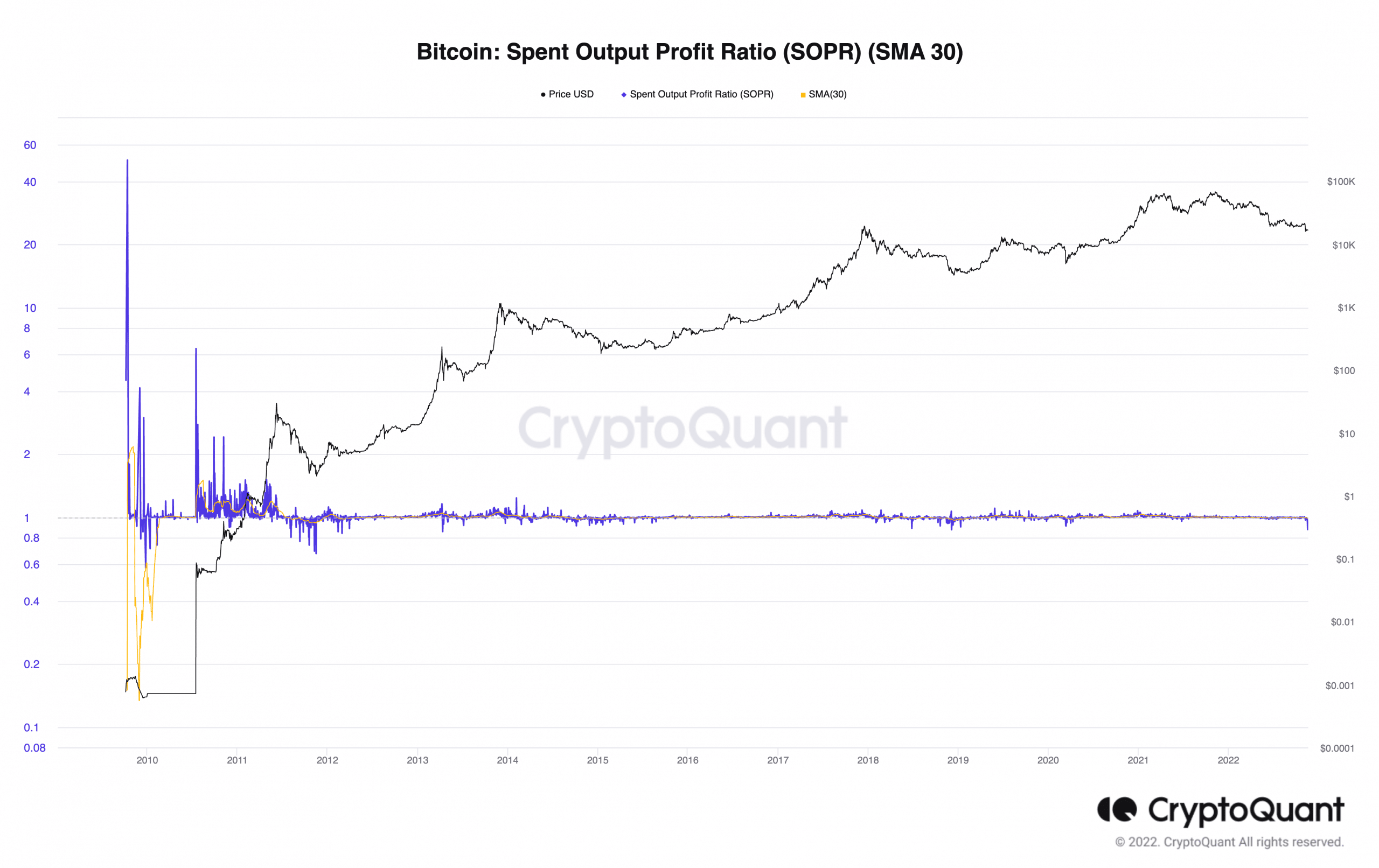 Additionally, since the SOPR was less than one, another scenario could be in play. Of course, it was almost inevitable that the daily moved coins were sold at lower prices than bought.

However, it was also likely that profits realized were held rather than spent. If this was the case, it would be difficult for BTC to exit the declining volumes discussed earlier. As of this writing, Bitcoin’s volume had not improved since 18 November. According to CoinMarketCap, its volume dropped 14.27% to $23.02 billion in the last 24 hours.

Despite the drawdown, many long-term investors were still in profit. This was ascertained by the Unspent Transactions Output (UTXO) position. According to Glassnode, the UTXO in profits at press time was 93,963,834. This implied that these addresses bought Bitcoin at a lower price than its current state. Hence, they have remained in profit without attempting to transact the holdings.

On the flip side, UXTO in losses trailed behind those with gains. Glassnode showed that these addresses reached 42,516,192. However, it was important to note that those losses rose since BTC’s dump to $16,000. At the same time, the value of UXTO in profits might be considered low. Thus, its current position could signal that the BTC market bottom was close. 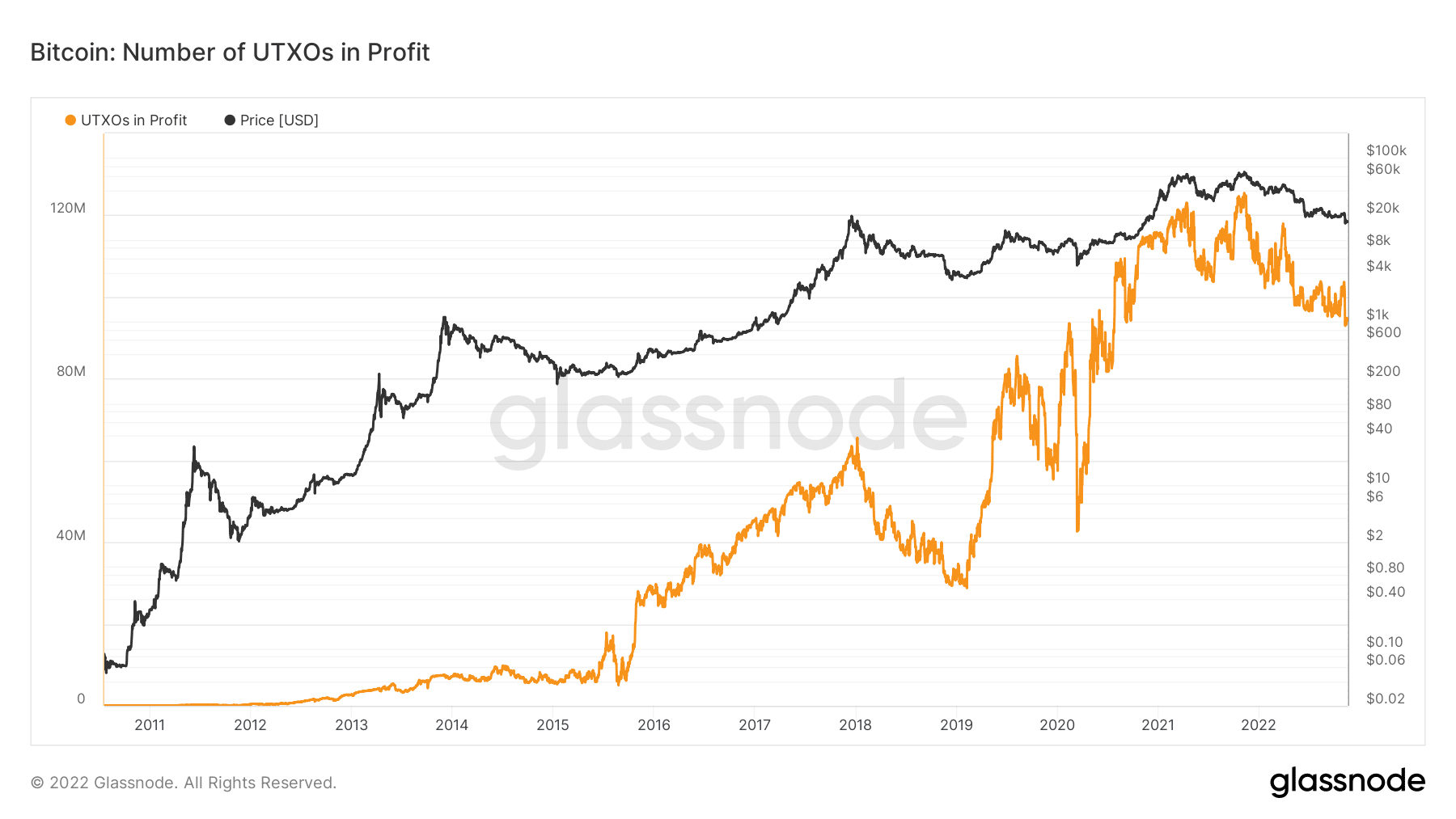 Investors might have hoped that the current region was the last base. However, indications from the four-hour chart had opposing opinions. According to the chart, the Bollinger Bands (BB) showed low volatility, indicating that BTC might not explode within the current levels in the short term.

Similarly, the Exponential Moving Average (EMA) supported the indications of the BB. At press time, the 50 EMA (yellow) was positioned above the 20 EMA (green). This stance implied that the possibility of a glaring near-term respite was close to zero.

However, the longer timeframe revealed by the 200 EMA (cyan) appeared to align with a recovery. With the 200 EMA above the shorter period, the king coin holder might need to persevere. 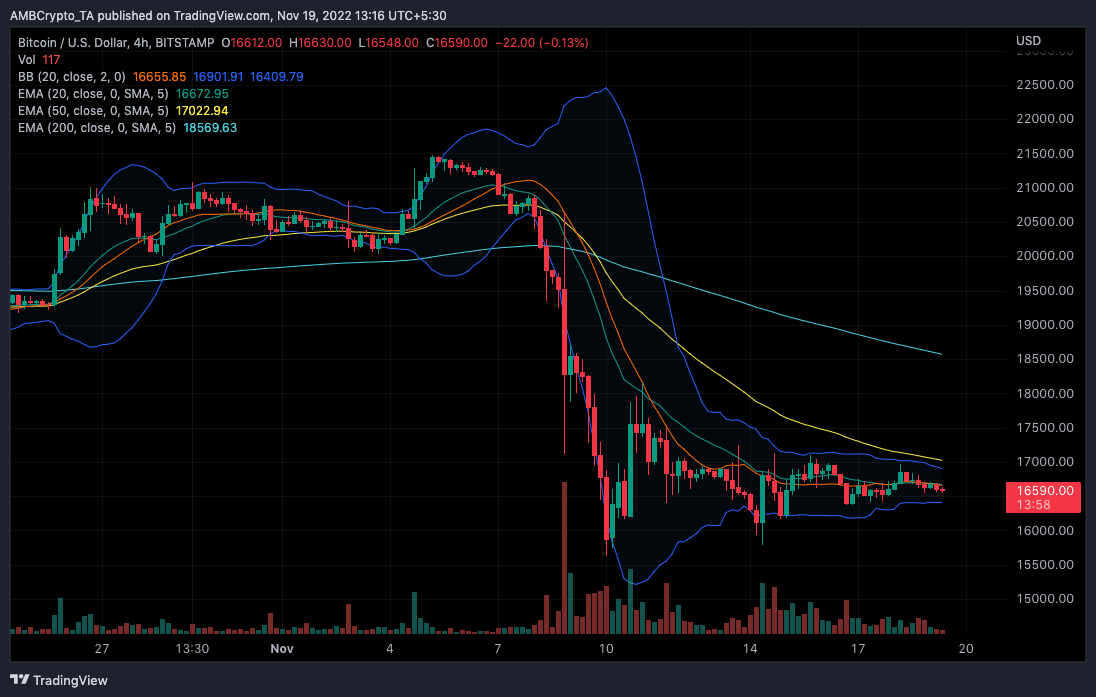