A former Goldman Sachs vice president of investment banking: “We should be glad that traditional Wall Street hasn’t come around to embrace crypto yet.”

When the Goldman Sachs report came out dismissing Bitcoin’s status as an asset class, there was significant backlash from the crypto community. This is understandable, as for those building in crypto, the points against Bitcoin didn’t make sense.

For nearly a decade of my career, I was a banker at Goldman, but decided to leave Wall Street to join an incredible group of people at OKCoin, who are on a mission to make crypto trading easy and accessible for everyone around the world. Having been on both sides, I can appreciate why Goldman Sachs analysts made certain arguments in their recent position. I may not agree with it, but I fundamentally believe that being open to different perspectives is critical to building the right crypto ecosystems that can lead us to mass consumerization.

Goldman analysts argue that “Bitcoin is not an asset class.” Insert “traditional” in their statement and we get closer to reality. It’s important to remember that every asset class has its early years and it takes time for a new one to be recognized by major financial institutions.

Case in point: Data shows that private equity and venture capital have been outperforming more traditional asset classes like bonds and equity, particularly so over a longer time horizon. 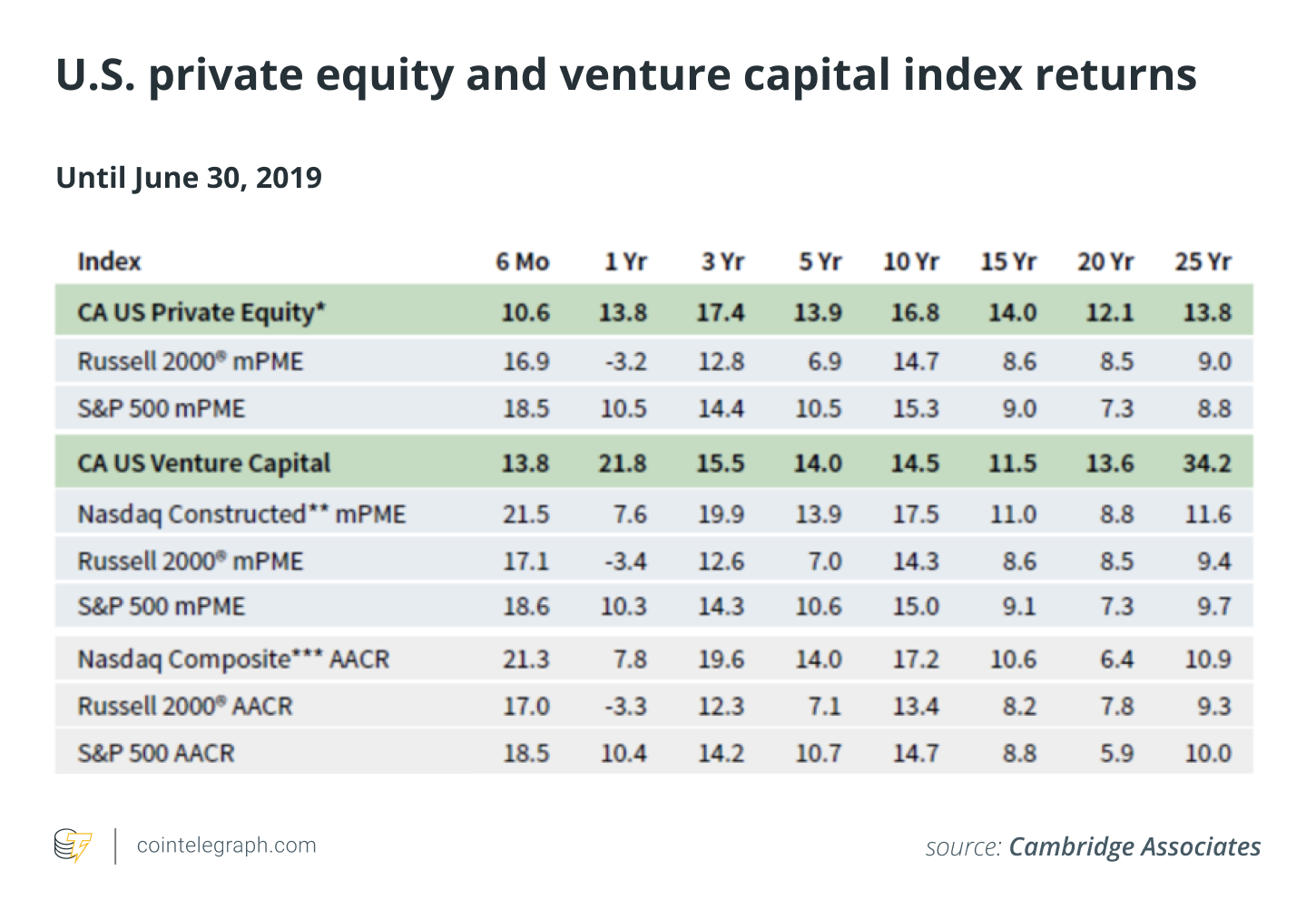 However, one can easily forget that neither of them were considered an asset class when modern portfolio theory was born in 1950. Modern private equity originated in the 1940s, but only started to gain traction in the 1980s when groups like Kohlberg Kravis Roberts started to perform high-profile management buyouts.

Similarly, venture capital, which has played an instrumental role in the rise of Silicon Valley and now dominates today’s list of top global public companies, was created in the 1960s but remained quite a niche method of investment until the first internet bubble of the late 1990s. It has taken time for both to mature and be widely accepted by investors as alternative asset classes.

It also takes vision and courage for investors to understand and embrace an emerging asset class that challenges known assumptions. Those who can embrace it have a chance to reap an outsized return.

Goldman analysts are correct in stating that “Bitcoin doesn’t generate cash flow like bonds” and, “Nor does it generate earnings [like equity].” The fact of the matter is that Bitcoin (BTC) was not designed to fit into such existing frameworks. Would you expect the United States dollar to generate cash flow like bonds or generate earnings like equities? Bitcoin is a drastically new asset class — it’s a native currency for the internet.

Bitcoin represents a continuation of the paradigm shift that was ushered in by distributed computing, the basis of the internet. This shift has seen information and communication increasingly democratized over the last several decades. Individuals have greater ownership in not only sharing information, but more importantly, the creation of information.

Our lives are being digitized. Every one of us generates a growing amount of individual data through various online activities. This change has affected nearly every aspect of our lives, except finance. Central banks are at the center of money creation, commercial banks are at the center of the financial system directing financial resources, and large internet companies are at the center of gathering and monetizing our individual data. We haven’t seen the democratization of value creation, value distribution and/or value transfer because before the inception of Bitcoin in 2009, there was no practical way to digitally transmit value without an intermediary that could facilitate trust.

Based on a distributed node system, Bitcoin democratizes the transfer of value. It’s the first internet-native token that has been created in a fully decentralized fashion. It’s not issued by any controlling third party, but instead is prescribed in code and functions through decentralized activities by all network participants. It demonstrates the possibility of a responsible financial system where monetary supply is not dictated by any single entity and therefore is free from inflation.

For those of us who live in the U.S., it may be hard to appreciate that Bitcoin has real use cases in emerging economies that suffer from significant inflation. Our customers in Latin America, for example, flock to Bitcoin for wealth protection. Some merchants also use Bitcoin to settle cross-border trades. It’s borderless, permissionless and censor-free, and one can enter and exit their position 24/7.

Equally important, Bitcoin shows us what a crypto future may look like, where individuals not only create and distribute information but also ascribe value to their activities online. Such value could be confirmed through a pre-set consensus mechanism without a middleman in between, building a solid basis for a free and inclusive global system. Individuals may finally be able to take control of their own data, get rewarded for their online activities with a set of agreed-upon incentives, and transact freely with other individuals. Before Bitcoin, a secure and sovereign digital future like this was never possible. Historically, paradigm shifts like this unleash significant value creation.

RECOMMENDED READ:  Does Bitcoin represent the much-needed 'honest money' in 2020?

It shouldn’t be a surprise that traditional asset managers aren’t embracing crypto yet. The fact that Bitcoin isn’t being fully embraced is the very reason that we are all here — the crypto community isn’t looking to do what’s already been proven. We are here to create and make the unimaginable possible.

An asset for risk-tolerant, forward thinkers

Asking whether Bitcoin is an asset class is the wrong question. The right question is: Who can invest in crypto and what role can it play in your overall investment portfolio? We shouldn’t be talking about investment in a vacuum. Whenever an individual constructs their investment portfolio, the asset classes included in the portfolio are always a function of the investor’s goals, timeline and risk tolerance.

Bitcoin is seen as a volatile asset, so naturally it won’t be right for those who have a short investment horizon and are extremely risk averse. However, if you are looking for long-term return and are willing to put in efforts to do your due diligence, you may be looking at a great alternative (or supplement) to bonds and stocks, and even to private equity or venture capital investments.

Similar to private equity and venture capital investments, Bitcoin has the potential to generate a superior long-term return. They are also similar in that they require more due diligence and more active management in order to get an outsized return. The key limitation of these investments is that they generally require a minimum net worth of investors and are not liquid. In contrast, Bitcoin is very liquid (trading 24/7 globally) and has no minimum investment barrier. It is a truly democratic form of investment available to everyone.

When Goldman Sachs’ analysis concluded that “a security whose appreciation is primarily dependent on whether someone else is willing to pay a higher price for it is not a suitable investment for our clients,” they were implying that cryptocurrency (including Bitcoin) is a bubble that has no inherent value.

Instead of being offended by such a claim, I actually find it a very powerful and helpful reminder. It reminds me that we still have a long way to go before crypto becomes mainstream. Confusion remains around what Bitcoin is and how it works. The crypto community needs to rally together and provide better education to encourage mass adoption.

It also reminds me that our industry is still in an early stage. We won’t convert nonbelievers over Twitter. We need to do that by focusing on building the foundation of our future. This is why we have a dual focus at OKCoin: Making it easy and safe to buy and sell crypto worldwide, and being an adamant supporter of the open-source developer community (with our most recent contribution being a $100,000 grant to BTCPay Server). We need to work hard to make sure that crypto will not turn out to be a bubble.

Lastly, it reminds me as an investor that this might be one of the best times to continue to invest time (and money) into Bitcoin before a consensus is reached. Two golden principles of investment that I believe in:

Goldman’s conservative outlook on Bitcoin reinforces the opportunity identified by the crypto community as early adopters.

“Open your eyes, look into the future”

Elon Musk provided a recent example of what happens when you push development of an innovative concept towards reality. He recently pinned a tweet that says, “Open your eyes, look up to the skies,” channeling the words of Queen’s Freddie Mercury. These were inspiring words as we witnessed the launch of SpaceX’s Dragon Endeavour spacecraft over the weekend. It’s an incredible example of what happens when vision and action come together to create a powerful impact. “Open your eyes, look into the future” — that’s how I feel about crypto, and I hope you do too.