In the last seven days, HBAR, Hedera Network’s native cryptocurrency, has seen some positive growth. The network, on the other hand, had more to offer. In addition to the price of HBAR, its blue chip NFTs have seen some growth in recent days.

Baboons are hungry for more

One of Hedera’s top performing NFT’s Hungry Baboons, recently crossed 10 million in terms of volume over the past two weeks, as of 29 October. The same was retweeted by the official Twitter handle of the NFT collection.

Not only that but the weighted sentiment around Hedera also grew. This indicated that the crypto community’s overall outlook towards HBAR was getting positive.

However, despite the success of some blue chip NFTs and an increasing positive sentiment for Hedera, there was trouble. HBAR’s NFTs failed to compete with other blockchains in terms of their NFT growth.

A roadblock on the road to recovery

As can be seen from the image below, Hedera still didn’t qualify as a strong competitor for other NFT collections. On the contrary, HBAR’s NFT collection had a long way to go before it could compete with major players in the market. 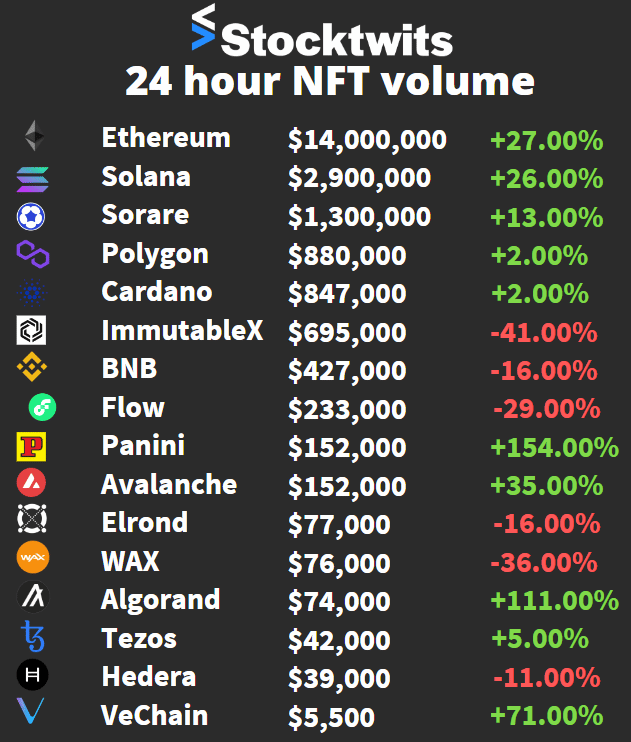 Moreover, there were other positives that could be considered as well. Hedera’s volume grew significantly over the past week. As can be seen below, Hedera’s volume went from 20 million to 35 million in the span of a few days.

Along with its volume, HBAR’s market cap continued to grow as well. However, Hedera’s development activity continued to decline during the same period, which could play against the growing numbers.

A declining development activity amid Hedera’s mirror node issues could be perceived as a problem. However, the issue with the mirror node problem was resolved on 27 October.

At the time of writing, HBAR had been trading at $0.0605 and had appreciated by 2.70% in the last 24 hours according to CoinMarketCap. However, its volume depreciated by 18.15% during the same time period. Its market cap appreciated by 3.07% as well, and at the time of press HBAR had captured 0.16% of the entire crypto market.