Bitcoin (BTC) experienced on the last day a drop below $9,000. Traders have been analyzing the situation to further understand what could happen with Bitcoin. According to data provided by CryptoQuant, there has been an inflow of BTC into exchanges and their wallets.

As reported by CQ.Live, the total BTC inflow into exchanges has grown the day in which Bitcoin experienced its price drop. This could be related to large investors, miners or other market participants that wanted to sell their funds.

Furthermore, as reported by ByteTree, miners had to sell larger amounts of BTC than what they currently mined in order to remain profitable. They have created around 5,231 BTC but they had to spend 5,846 BTC. Thus, it may be possible for miners to have been behind the recent market drop.

As usual, once Bitcoin falls, other altcoins follow. This is why the entire crypto market showed weakness in the last few days. Despite that, the long-term outlook remains unchanged for BTC and most of the altcoins in the space.

It is worth pointing out that the charts were also showing an imminent drop. As you can see in the chart below, Bitcoin broke below the bottom channel of an upward trend that started several weeks ago. This could be momentaneous and recover in the coming days entering once again to the channel or we could see BTC falling to the $8,000 price level. 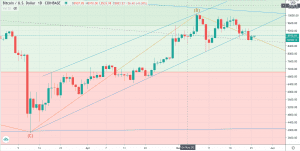 Coming back to miners, the Bitcoin network experienced a halving event on May 11. This reduced the rewards they receive by 50%. Before they were receiving 12.5 BTC per block and now they are receiving just 6.25 BTC per block. This is one of the most important features of Bitcoin, it has a clear monetary policy and decreasing inflation rates over time.

The data we have shown is important to understand that miners have been selling even some BTC they have stored in order to face the high costs they handle. Miners must pay for electricity bills, some employees and keep their farm running efficiently. All these expenditures can be very high, this is why they had to sell larger sums of BTC.