The U.S. stock futures continue to surprise traders and investors as the Dow Jones futures rose over 500 points to start the week. Despite the comments from the Fed about the economic recovery taking longer, it was overshadowed by recent reports of a “positive” vaccine data.

Along with the rise of the Dow Jones futures, the S&P 500 futures and Nasdaq-100 futures also rose 2.92% and 1.92%, respectively. In addition, the oil markets also jumped in today’s trading, helping the markets’ sentiment with the recent news of Saudi Arabia cutting its production starting June.

Last week, the U.S. reported a total of 36.5 million jobless claims and are still expected to set record highs amid the coronavirus.

A possible catalyst for the Dow Jones this week would be the appointment of Moncef Slaoui by President Donald Trump with its coronavirus vaccine acceleration program called “Operation Warp Speed.” 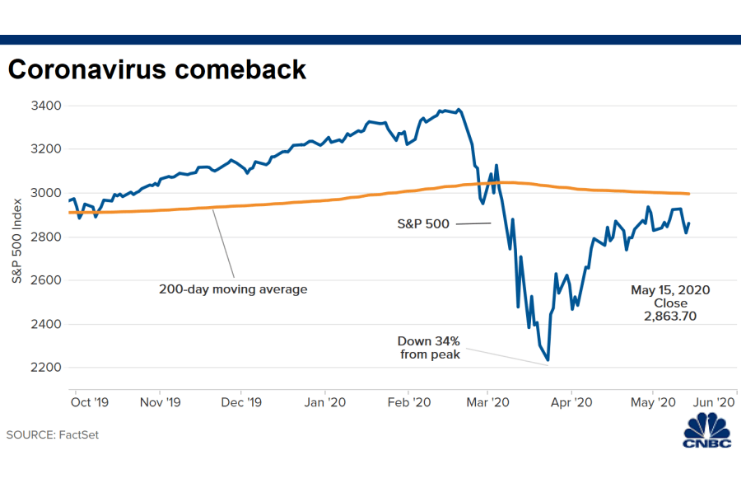 Powell: GDP could shrink by 30%

In an interview in 60 Minutes on CBS, the chairman was confident that the global economy can combat this short-term downtrend.

According to Powell, this economic crisis is different from the 1930 Depression era because of the active involvement of the Fed as well as Congress doubling its efforts in passing another stimulus bill as he adds:

“There’s a lot more we can do […] We’ve done what we can as we go. But I will say that we’re not out of ammunition by a long shot. No, there’s really no limit to what we can do with these lending programs that we have.”

The Fed can still help the Dow Jones along with the rest of Wall Street with its programs but they also need the government’s participation in the economy.

Is the vaccine data enough to jumpstart Dow Jones back

Moderna, a Massachusetts-based biotechnology company, had a robust rally of over 28% after they reported “positive” phase one results for a potential coronavirus vaccine.

In a recent report from CNBC, Moderna conducted an early-stage human trial with 45 participants. Study participants received two doses of the potential vaccine and were tested 28 days apart. According to the report, the vaccine also produced neutralizing antibodies against the coronavirus in at least eight participants.

It looks like Gilead is out of the spotlight for now as Moderna becomes the first company to release data on a human trial testing on the coronavirus vaccine.

Market participants should observe if the healthcare sector can push the Dow Jones back to where it should be.