Bitcoin‘s price stumbled to lower levels after it hit an all-time high of $42k. Recently, the largest digital asset was able to trace its steps back to $38k before witnessing another fall. This time around, however, this price drop was an opportunity for institutions to pack even more BTC. Grayscale has been one such active company that has added more bitcoin over the last three days.

According to data provider Bybt, as the price of BTC withdrew from $38k, Grayscale Bitcoin Trust added almost 10,000 BTC.

The above chart indicated that Grayscale Bitcoin Trust added even more BTC after a gap of almost 20 days. Although the previous purchase was more than the current one, the price of the digital asset has also increased significantly in the meantime.

It also noted three candles which indicated that the company increased its holdings by 2.17k BTC on 14 January, while an additional 2.61k BTC was added on 15 January. However, on 16 January this value was almost double as GBTC added 5.13k BTC to its bags. This has raised its total assets under management [AUM] to $22.9 billion for GBTC.

The increase in the past 24-hours indicated that the company is now acquiring almost 5.7x of the daily bitcoin entering the market. This may create a shortage for other retail investors.

Market Observer Bloqport noted that, in the last 30 days, 67K BTC had remained unchanged at $2.5 billion. These BTCs have been moved to hot/cold wallets. 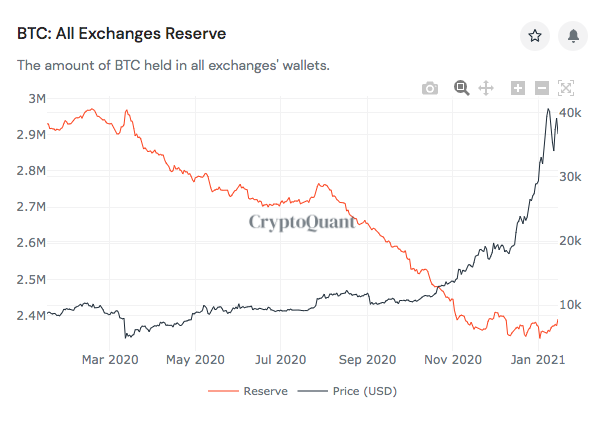 Whereas, if we zoomed a little more to the fall we witnessed in March 2020, the bitcoin exchange rate has dropped dramatically by 21 percent from over $20k to $5k now.

Demand for a digital asset remained high among institutions such as Grayscale, which saw a 900 per cent increase for its GBTC in 2020. While falling prices have provided an opportunity for most institutions to “buy the dip” and create a shortage of already scarce cryptocurrency. This added to Bitcoin’s growth momentum and boosted accumulation for Bitcoin whales as well.

READ ALSO:
Grayscale’s Bitcoin premium at discount price for the third time, invest now or not?

The value of most cryptos has been trending lower given the price correction in the market. Ethereum, the largest altcoin Read more