Token with a dog theme On 14 January, Bonk [BONK] announced the formation of BonkDAO, giving the Solana [SOL] community even more reasons to rejoice. As the first memecoin in the SOL ecosystem, the team behind BONK sought to capitalise on the buzz.

The first step has been taken in the formation of BonkDAO. This will put BONK to use in growing the ecosystem.

In its one-pager, BONK stated that they wished to shift the focus away from ‘toxic Alameda tokenomics’, which plagued Solana throughout the latter half of 2022. And boy, they didn’t disappoint!

As per CoinMarketCap, SOL soared by 40% at press time to trade at $23.48, its highest price in over two months. The bullish momentum looked set to push the price to pre-FTX levels.

This was in sharp contrast to SOL’s downward spiral after the FTX debacle, during which it dropped below $10, its worst performance in two years. The network got a lot of bad press because of its links with disgraced FTX founder Sam Bankman-Fried, which contributed to the negative sentiment.

The heavy lifting undoubtedly has been done by BONK, which has caught the attention of memecoin enthusiasts. Consequently, BONK’s market capitalization hit over $60 million at press time.

According to data from Dune Analytics, the number of users has exploded since the beginning of the year with more than 100k cumulative BONK wallets recorded at press time.

BONK’s impetus led to a jump in SOL’s Defi activity. As per data from DefiLlama, the number of protocols on the Solana chain increased by 13% over the previous day, even more than other networks like Ethereum [ETH] and Tron [TRX]. The total value locked (TVL) on the network also shot up by 11%. 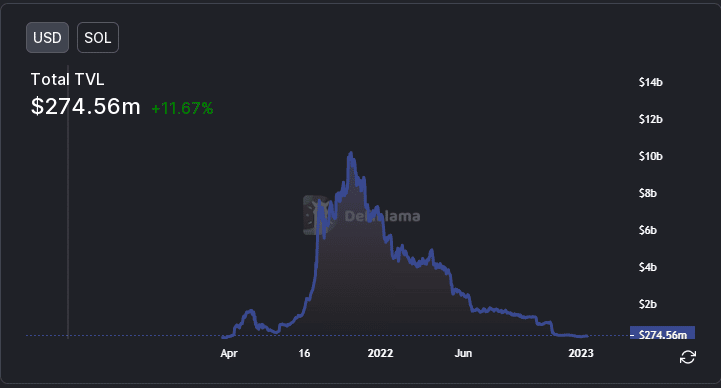 However, SOL’s NFT trade volume tapered down, which went against the trajectory of price, per data from Santiment. After hitting $1.21 million on 12 January, it halved on the next day and progressively reduced until press time. The social dominance exhibited the same behavior.

However, SOL investors may want to put this short-term dip behind their backs and bet on BONK’s popularity in the coming days. Anyway, memecoins have a history of cashing on the perceived popularity among community members.