Polygon [MATIC] experienced tremendous growth in terms of development and partnerships in 2022. However, Terra Luna and the FTX crash in 2022 both had a negative impact on the blockchain. As a result, MATIC rose to $2 before falling back to $1.5 and below $1 at the time of writing.

MATIC was trading at $0.8416 at the time of publication, following a series of price corrections.

by introducing new supports However, MATIC’s long-term outlook could paint an interesting picture.

Long-term EMA moving sideways: will MATIC get stuck in this range? 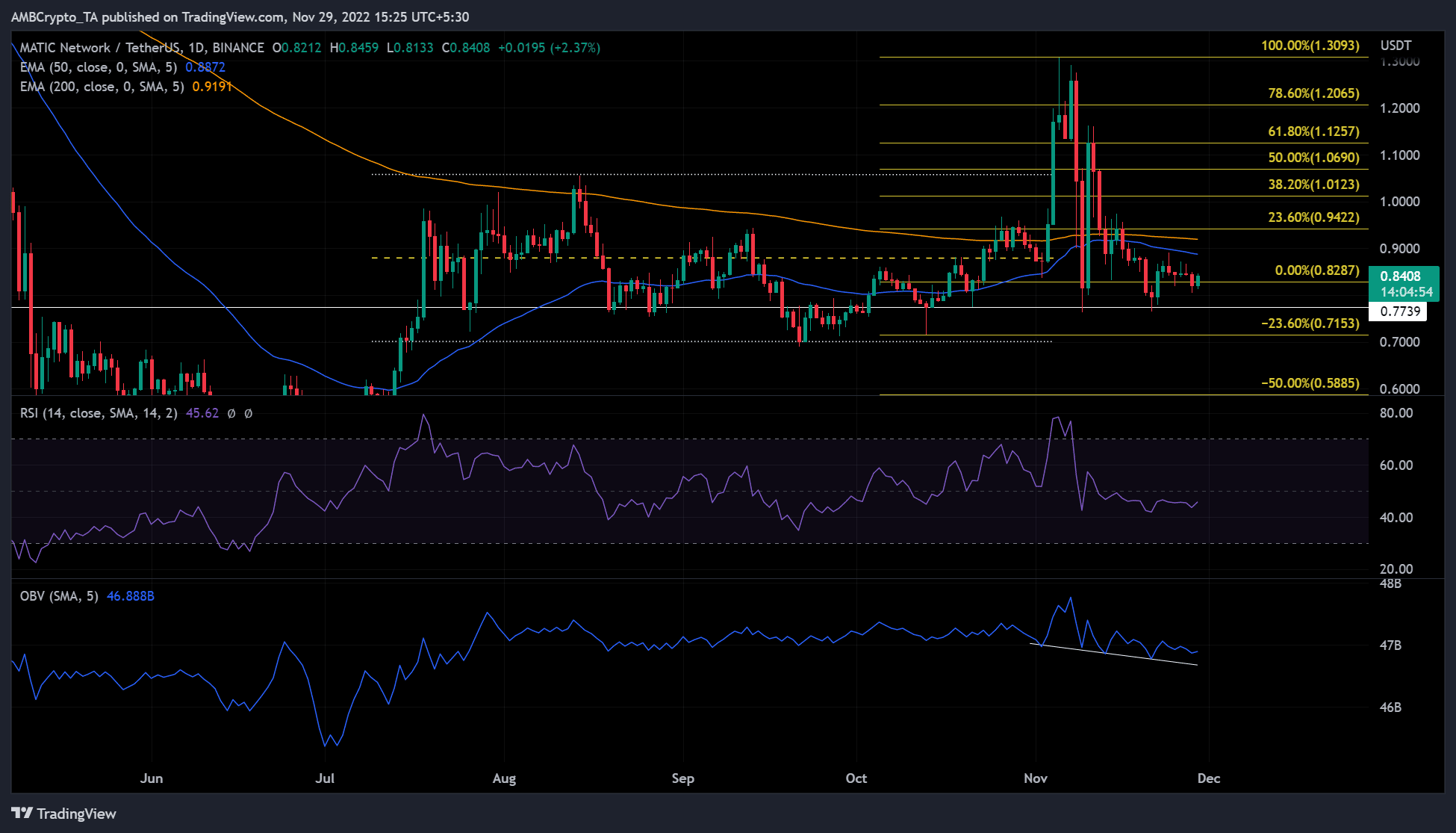 MATIC has been trading within a range since August. This was illustrated by the short-term Exponential Moving Average (EMA) (blue line). The short-period EMA alternated between resistance and support several times between August and October. This underlined the impression that MATIC traded sideways during this period.

In particular, the 200-day EMA (orange) acted as a resistance during the same period. MATIC only broke through it on 3 and 10 November.

At press time, the 50-day EMA was in a downtrend, while the 200-day EMA moved sideways. This indicated that MATIC could break new test new support levels in the short term. However, in the long term (a few days or weeks), it could turn back to trading within a range.

The On-Balance Volume (OBV) supported the above-mentioned trend. It reached a series of lows, which indicated a decline in buying volume and pressure. Furthermore, the Relative Strength Index (RSI) was seen moving sideways below the neutral 50 level. This showed that the bulls were losing influence without giving the bears complete market control.

Thus, the tussle between bulls and bears could take MATIC to the range between $0.7739 and $0.9422. However, an intraday close above the 23.6% Fib level would invalidate the above bias.

MATIC’s open interest rose steadily from October to early November. Since then, however, it has been on a steady decline. This indicated a decline in money inflows into the derivatives market and painted a bearish outlook. A further reduction in prices on the spot market was therefore likely.

Development activity increased since Q3, but the negative sentiment remains

Data from Santiment supported the above-mentioned bearish outlook for MATIC. The data showed a negative sentiment despite a steady increase in development activity from Q3. Thus, further price recovery could be hampered by the negative sentiment.

Where does MATIC go from here

MATIC’s price performance was more than just dependent on metrics. It lost its $0.82 value after BTC lost $16.20K, thus proving BTC’s influence on the altcoin. So does MATIC offer long trading opportunities in the long run?

No. Both EMAs were significant resistances, and the negative sentiment and falling OI didn’t support such inclination.

Are there opportunities for short-selling? Yes, possible in the short term, with $0.7739 and $0.7153 as new supports. However, in the long term, MATIC could trend sideways, and watching the general sentiment and BTC’s performance could provide a better price direction.