Since the beginning of June, the bitcoin market has experienced significant declines. As the month came to a close, the greatest digital asset had plummeted by 30% and was still showing signs of strong bearishness. The declining value of the digital asset has had a direct impact on the profitability of miners, who were already dealing with another regulatory problem.

On the 30th of May and the 14th of June, the mining difficulty was lowered by 16% and 5%, respectively. The Bitcoin network was planned for another adjustment on June 29th, which is expected to decrease by 23%. This will make it more difficult for miners to mine Bitcoin blocks, resulting in longer block times.

Every 2016 blocks, the mining difficulty is meant to adapt itself. Now that the miners have been forced to halt operations, the next difficulty level will be reduced.

According to data provided by Glassnode, on 27th June, the Bitcoin network was noting an average time of 1400 seconds or 23.3 minutes to mine one block.

This was the longest daily mean block interval since mining’s inception. This means that just 58 blocks were mined on Sunday, representing a 60% decrease from the baseline of 144 blocks/day.

The insecurity noticed in mining operations due to declining hash rate has now resulted in miners’ earnings collapsing. Their income dropped from $70 million in May to $12.8 million on June 27th. This was an 80% decrease. Miners last earned this much in November 2020, when the price of Bitcoin was approximately $13,000. 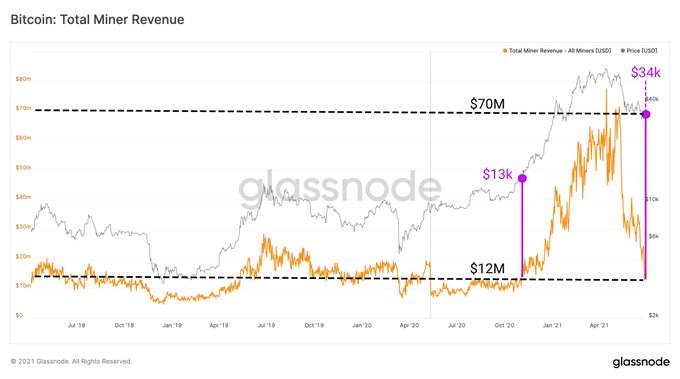 Bitcoin is in peril as a result of China’s crackdown on cryptocurrency. However, Bitcoin miners experienced a period of poor profitability even before Bitcoin’s halving last year. Mining will become more dispersed as miners relocate to Kazakhstan and the United States, putting the digital asset back on track.

RECOMMENDED READ:  What's the odds of XRP reaching $3? Here is the deal