Ethereum and the entire cryptocurrency market have been closely following Bitcoin’s every move throughout the past couple of weeks, which has provided little insight into where they might trend next.

As such, the market’s near-term outlook should depend largely on that of Bitcoin, which could prove to be somewhat grim if it is unable to find any upwards momentum in the near-term.

RECOMMENDED READ:  After new ATH of $41,940, amid the U.S dollar essential threshold suggested

While sharing his thoughts on where Ethereum will go next, one analyst explained that $580 is the level to watch.

A break above this could provide it with some intense momentum in the days ahead, he claims.

At the time of writing, Ethereum is trading down just over 1% at its current price of $552, which is around where it has been trading throughout the past day.

The support just below its current price has been intense and reclaiming $560 should provide it with even further support for it to grow upon.

In the meanwhile, however, Bitcoin’s price action will likely continue determining its fate, which makes BTC’s reaction to $18,000 vital in the hours ahead.

One analyst believes that Ethereum could soon push higher if it can build a strong base of support between $550 and $560. He even notes that this could result in the crypto seeing a move up to $580, which is the first key resistance level he is watching.

“ETH / USD: Even though $550 & $560 seems to be acting as support at the moment, which is important as they are both key levels we really need to find some momentum from buyers. Looking at the LTF chart, think buyers need to flip $580 back into support before being leverage long.” 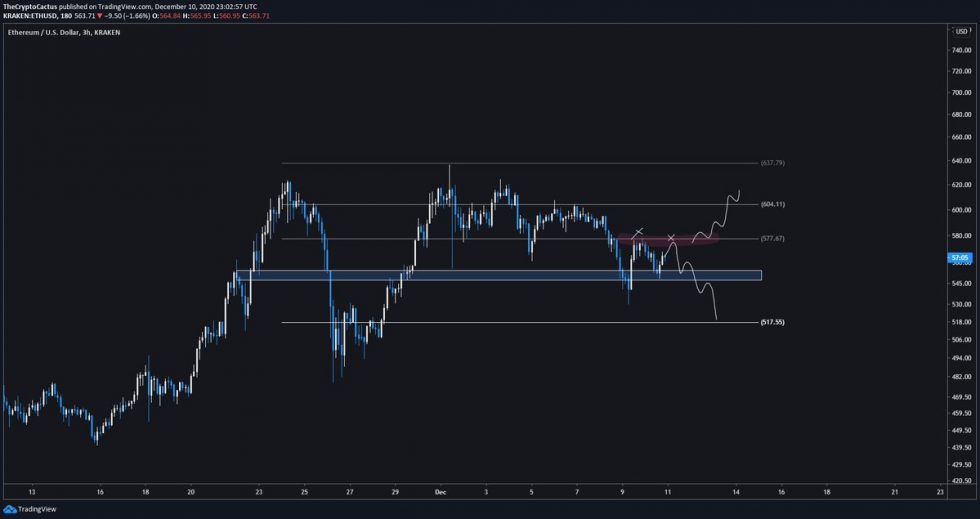 The coming hours should reveal insight into Ethereum’s reaction to all of the aforementioned levels. Any continued weakness will likely come as a result of Bitcoin.