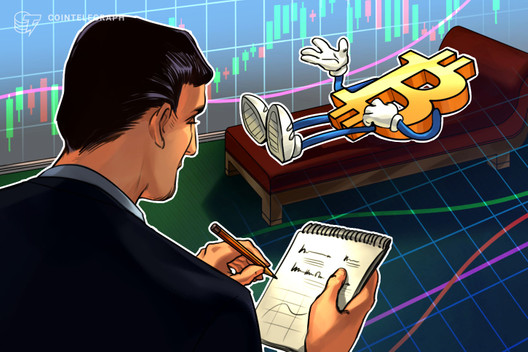 A sideways week for Bitcoin will not come as a surprise but BTC is still poised for a big move soon as it hobbles inside a tightening range.

Last week, Bitcoin (BTC) looked poised for a huge move up to $11,000. Instead, we saw a sidewards week of price action coupled with a small pullback. Has Bitcoin topped out? Is there too much selling pressure around $10K?

Let’s take a look at what’s happening with the largest cryptocurrency by market capitalization, BTC.

Bitcoin currently faces huge resistance between $9,500 and $10,005, according to the Binance order book shown on the Tensor Chart heat map above. At present, these sell walls, the bulk of which is represented by the yellow lines, show a total of 1,737 Bitcoin sells vs. 1,351 buys represented by the darker blue lines.

While this data is only on the Binance BTC/USDT chart, it gives us a good indication that at present there is not enough buying pressure to push BTC/USD above $10K. However it’s important to note that this data changes constantly, and it should only be relied on as long as it’s constantly referenced.

That being said, this does explain why the price of Bitcoin is stuck in a tight range between $9-$10K, and until more buyers step in, it’s obvious that this won’t change.

The weekly view is bright 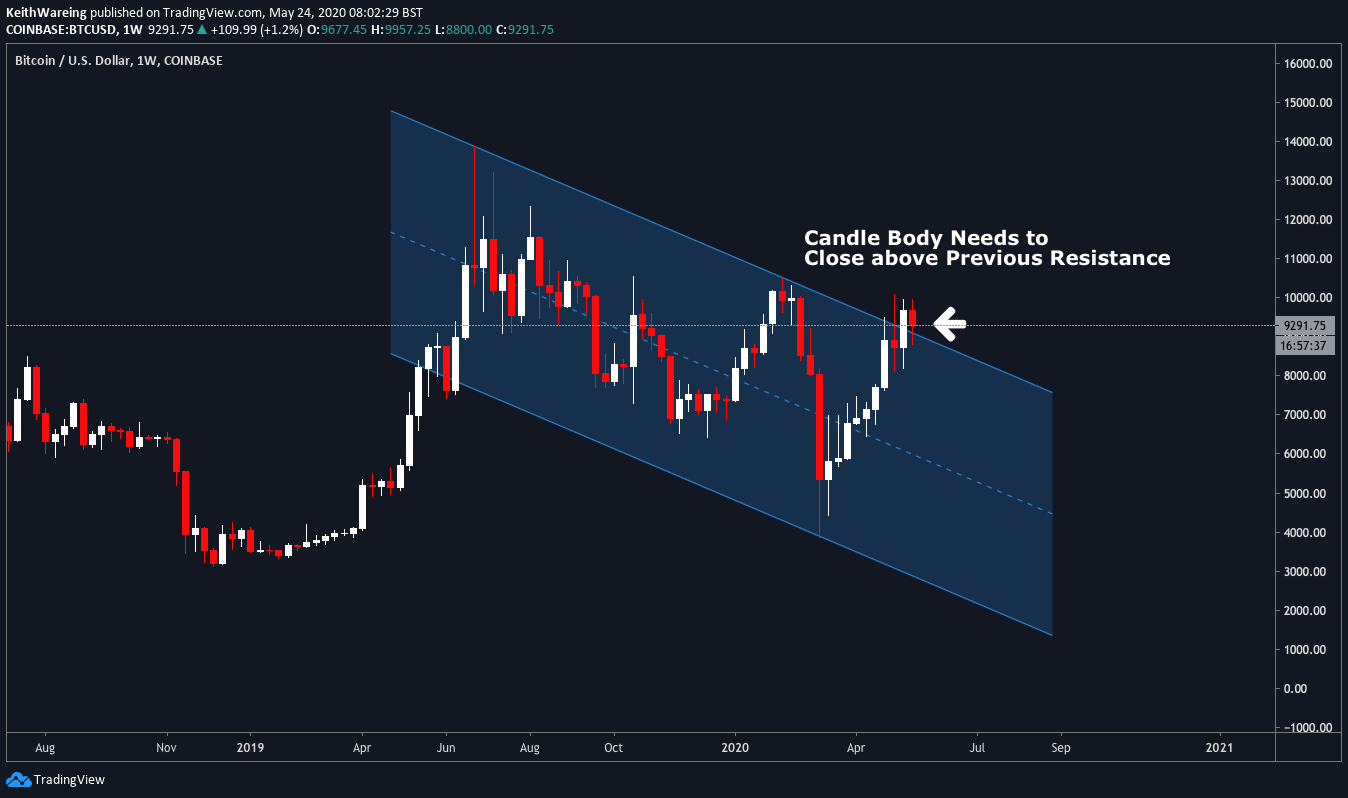 Over on the weekly chart, Bitcoin is currently holding above the previous resistance. However, we are yet to see a full candle body close above this line. At which point, it’ll be a clear signal for the bears to switch bias, and while it currently looks good at the time of writing, if we close below $9,000 today, it’ll be a big setback for Bitcoin in the short term.

All eyes should be on the $9,000 level throughout next week, however, as this is a breakout from a descending channel. Each week, this support level goes down by around $100, so a prolonged failure to significantly break through the sell walls could see Bitcoin’s support slowly fall to $6,400 by the end of the year. That is, of course, until a new path emerges. 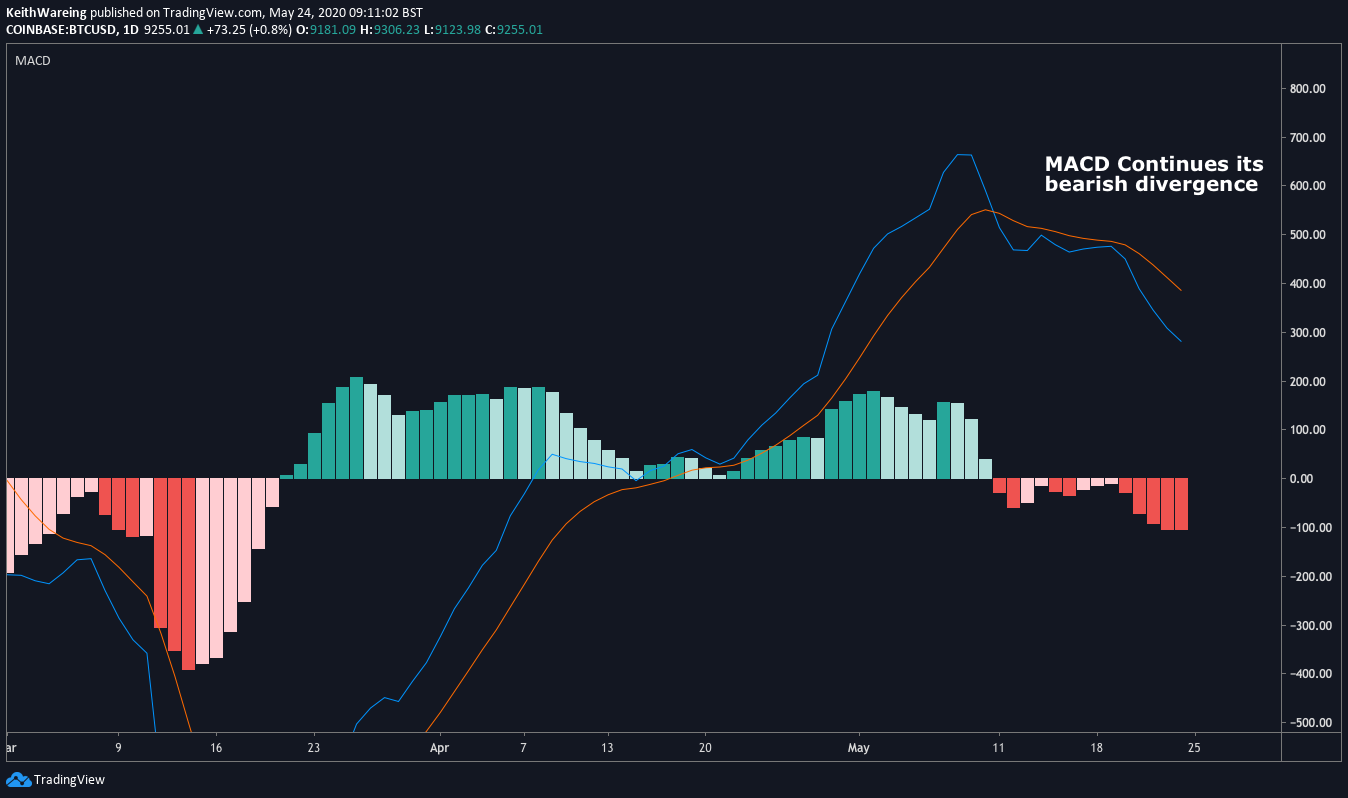 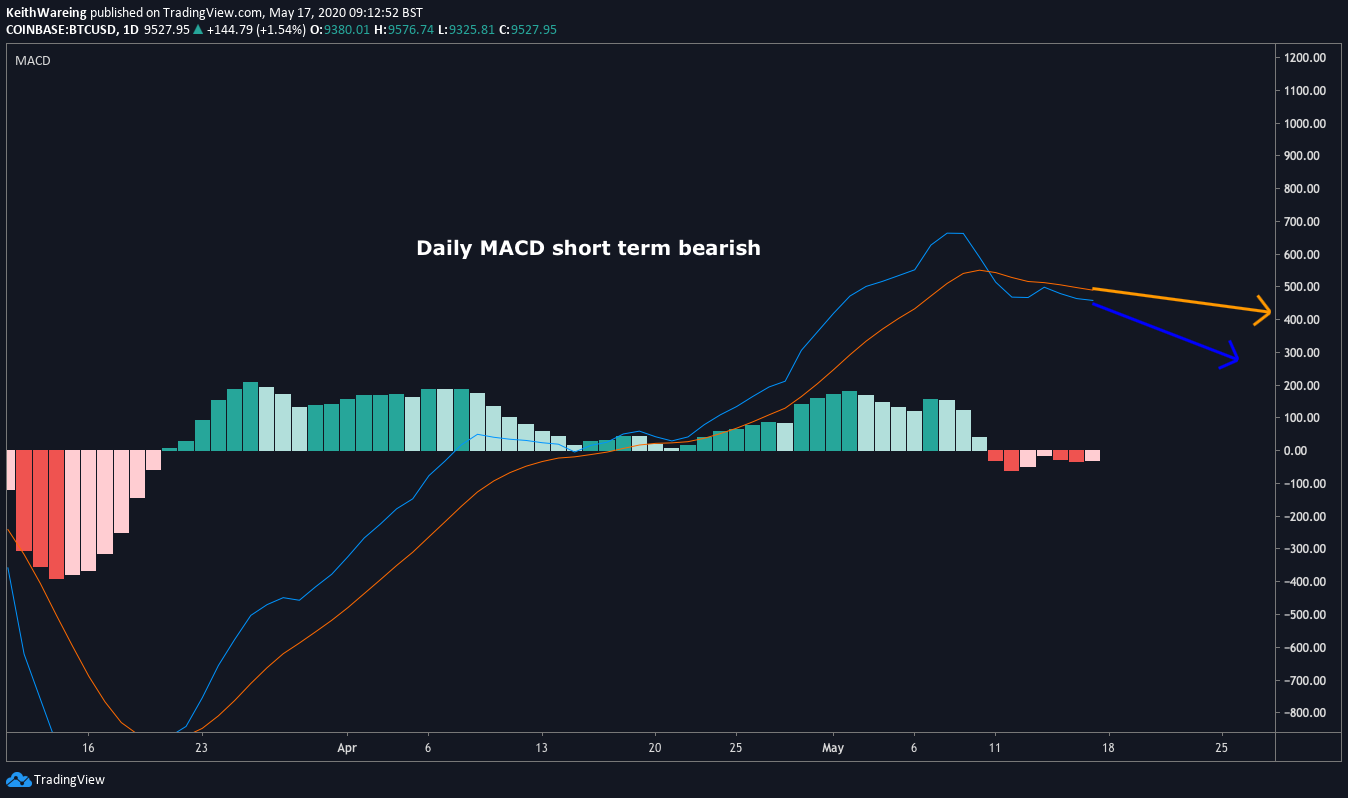 The moving average divergence convergence (MACD) indicator is continuing its bearish divergence as it played out exactly as expected from last week’s analysis. The top MACD image is this week, and it’s starting to show signs that it has reached its peak divergence denoted by the blue MACD line beginning to curve in slightly.

The bottom MACD image shows last week’s positioning where it looked prime for the signal line to fall to around 400 and the MACD line to 200. This is exactly where it sits today, and what is needed for a bullish reversal is for both lines to converge around 350.

Should the MACD start to move in this direction then it’s a clear sign for bulls to step in, and I would expect the level of buyers to increase. However, should the MACD and signal lines continue to diverge in this manner then don’t expect fireworks anytime soon. 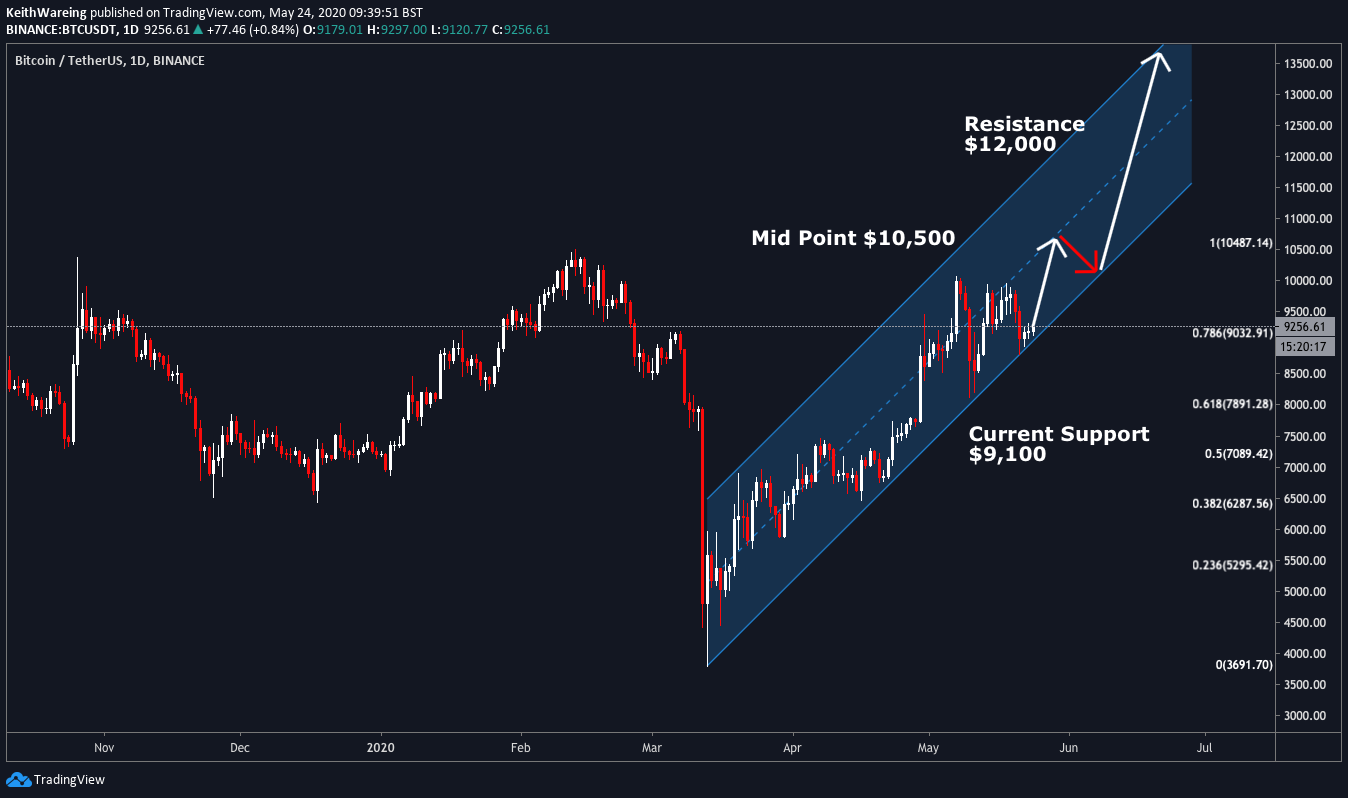 Moving down to the daily timeframe, and another path for Bitcoin opens up. At present, we are hovering just above the support of around $9,100, which shows the midpoint resistance of this channel around $10,500 by the middle of next week.

The midpoint level also matches up with a 100% Fibonacci retracement. So should Bitcoin reach this level, it will most likely be met with a lot of selling pressure where a pullback to the support would be expected before seeing any substantial moves.

However, by the end of the week the support of this channel will be around the $10K level, and this — dare I say it — could be the last time you will be able to buy Bitcoin below $10,000 (yes, slap yourself now). 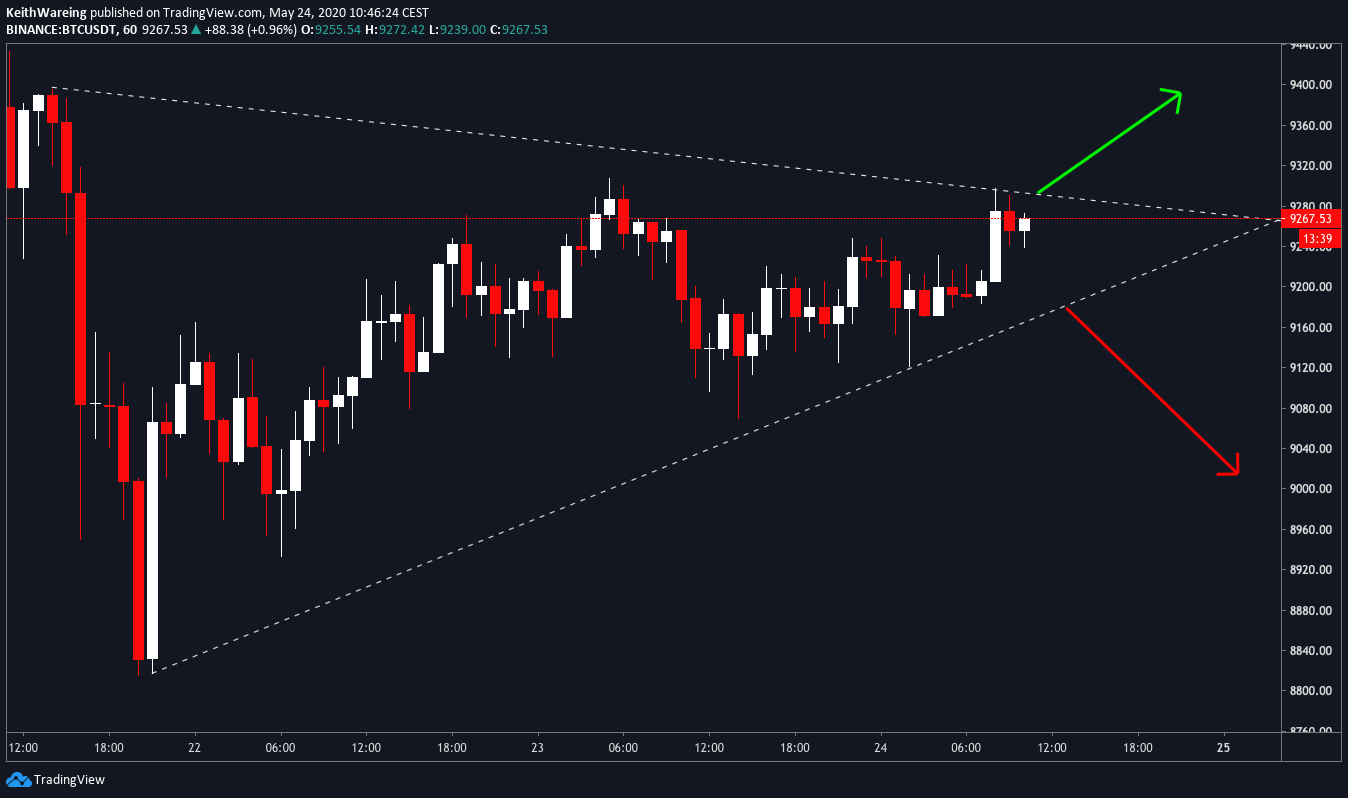 Finishing up on the hourly chart, and Bitcoin looks primed for a breakout to $9,400. This could close the week in a very bullish fashion. However, as I see it, even breaking down from this point to $9,000 would still leave bulls in control for the time being.

But breaking below $9K at this point would change everything, and as this is Bitcoin, be prepared for both eventualities as anything can, and usually does happen.

Falling below $9,000 opens up the .618 Fib on the daily of $7,890 as a stark reality. This would also completely invalidate both channels I’m looking at this week. From this level it would be time to break out the $6,400 and $4,000 charts again. But with that said, my personal outlook is another sideways week for Bitcoin.